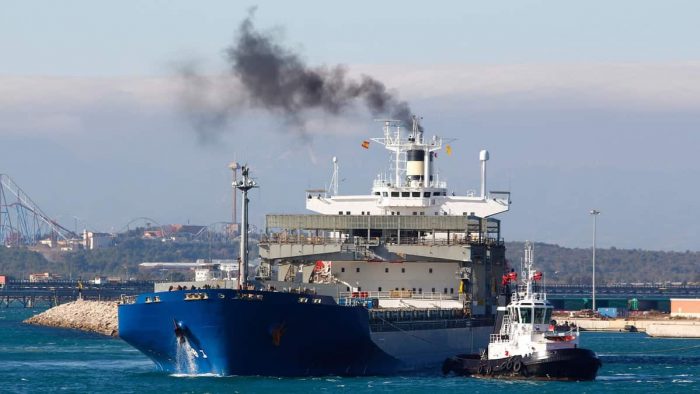 2020 has arrived and with it a new and historic rule for the shipping industry: a drastic reduction in the permitted level of sulfur in fuels. The commendable measure, which will contribute to reducing pollution in the global merchant fleet, will be paid by ordinary consumers, experts say. The decision that entered into force on the first day of the year has been described as “historic” and with the potential to “save lives.”

“The new limit will mean a 77% reduction in total emissions produced by ships, which is equivalent to an annual reduction of approximately 8.5 million metric tons of sulfur oxides,” says IMO.

Reducing the presence of sulfur prevents the emission into the environment of small particles in the burning of fuel oil that form when burned.

These polluting particles are related to asthma, strokes, lung cancer and other lung and cardiovascular diseases, as well as the generation of acid rain and acidification of the oceans.

For Bill Hemmings of the European Transport and Environment Federation, it is a “historic decision” which “will save millions of lives in the coming decades,” he told Reuters.

But behind the good news comes a cost that is not so obvious and has all the potential to have an impact on the common consumer, as commercial shipping industry analysts warn.

What will the ships have to do?

The main type of hydrocarbon used by the shipping industry as fuel is “heavy fuel oil”, a derivative of the distillation residue of crude oil, explains IMO.

Sulfur oxides (SOx) – known for their damage to human health – are released into the atmosphere when the fuel burns along with the rest of the ship’s emissions.

That will significantly reduce the emission of SOx, with what is expected “great benefits for both global health and the environment, especially for populations living near ports and coasts,” explains the UN entity.

The limit is not the strictest in the industry, as one of 0.10% is already in force in areas of the Baltic Sea, the North Sea, US coastal fringes. and Canada, and regions of the Caribbean Sea near US islands.

Now the shipping industry will have to obtain new fuel oil mixtures that meet the 0.50% limit, such as those already available in the market for the 0.10% limit, install gas cleaning systems called “washers” that reduce the emission of sulfur, or ultimately use another fuel.

A huge change (and its impact on diesel)

Experts indicate that one 90% of world trade moves by sea as, as IMO also points out, it is the most efficient form of transport to move huge volumes.

Since 70% of the operational cost of the shipping industry is fuel, Diane Gilpin (CEO of the Smart Green Shipping Alliance) tells The World, the US public radio program PRI in coproduction with the BBC, changing fuels implies a challenge of that magnitude.

Alan Gelder, chief of research in refining of the energy consultancy Wood Mackenzie, believes that the rule “IMO 2020” will make refineries “work in a way that they had never done before,” he told Reuters.

Others see a less encouraging picture: “The refineries will not invest to desulfurize the fuel oil and there is not enough low-sulfur fuel oil to meet the demand of the maritime sector,” predicts Robert Campbell, chief of petroleum products research at Energy Aspects.

In order to make the fuel of the ships cleaner, it is necessary to add more diesel to the mixture, so it is likely that a first impact of the “IMO 2020” rule in the general world market will be on the price of diesel.

Jamie Webster, an analyst at the Boston Consulting Group, tells The World that the shipping industry will now enter the struggle over the acquisition of diesel, which will affect many different sectors of the economy that use that fuel.

“From trains, diesel cars and even FedEx and UPS delivery trucks will enter the game. Then that could increase the price of diesel ”by US $ 1 per gallon (US3.7 per liter), according to the first estimates.

The IMO recognizes that “new mixtures are likely to be more expensive initially”, but considers that there are alternatives such as “scrubbers” to reduce the sulfur of heavy fuel oil already marketed.

Who will pay in the end?

So far the sulfur reduction plan has been viewed with caution by the commercial shipping industry.

“However, we are aware of the challenges involved in achieving total compliance, particularly when the industry faces exceptionally difficult times,” chief executive Diego Aponte told Reuters.

Based on initial estimates, Jamie Webster warns that fuel costs “will likely be between 50% and 60% higher” with these changes.

And in the end, merchants of all kinds – from cars to televisions – will look for ways to compensate for the blow to profits: “carriers will be interested in trying to pass those costs until they reach us, at the consumer level,” Webster points to The World.

The reality, experts say, is that in the shipping industry there is a gap that is used by companies when implementing changes such as the “IMO 2020” rule: there is no “authority” that monitors the use of fuels.

“There is a big question about the amount of traps involved. There will certainly be some, ”explains Rusty Braziel, an analyst at RBN Energy.

“There is no police force out there that enforces all this, it is being essentially implemented by the companies that feed these ships,” he warns.

But IMO has already said that the new sulfur limit is “cannot be postponed” and will begin on the first day of 2020.