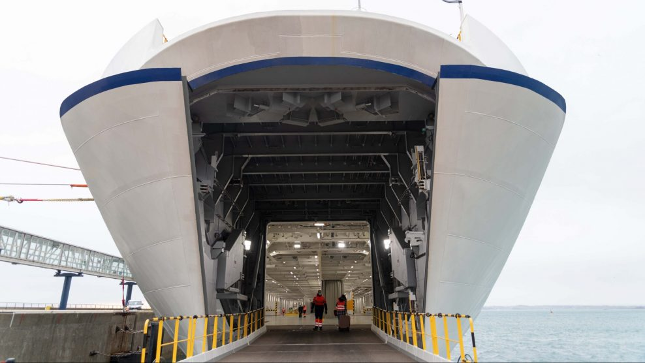 Eco-incentives for maritime transport start after the approval of Brussels 

The Government mobilizes the 60 million euros destined to encourage trucks to get on the boat to decarbonize transport.

The Ministry of Transport, Mobility and Urban Agenda has launched the first phase of the maritime eco-incentives program with the publication in the Official State Gazette (BOE) of the Ministerial Order that approves the regulatory bases for the granting of subsidies and the 2022 call to choose the shipping companies that will participate in the management. The announcement was launched in November last year, when they dated the publication of these aids in the first quarter of 2022, that is, until two months ago. However, the European Union’s approval times have delayed the deadlines. The government has mobilized the promised 60 million euros of initial budget destined to aid to the transport of goods “to encourage trucks to get on the boat,” according to the ministry. This budget item will be eligible from the Next Generation funds.

The objective of this line of subsidies is to encourage carriers, shippers and logistics operators, among others, to use the ship to transport trucks and consolidate and increase the share of maritime transport of goods, as well as promote the transfer from the road. In this way, the subsidies will serve to help decarbonize the economy, respond and the social and economic impact of the activity. “The eco-incentive prioritizes the environmental and socioeconomic merit that results from making this modal change,” say ministry sources. Last week, the Spanish Executive also activated a call for eco-incentives to promote rail freight transport also endowed with 60 million euros initially.

Shipping companies will have 15 working days to participate in the call in simple concurrence to choose collaborating entities from the day after publication in the BOE, so they can send applications until May 27, 2022. The documentation will be submitted electronically through the grants portal of the ministry’s electronic headquarters. Once the selection process of the collaborating entities has been completed, the call for traffic carried out until March 31, 2023 will be published, together with the list of the maritime transport services of eligible goods and the eco-incentive assigned. The aid linked to each maritime service will be calculated according to the environmental performance of the ships according to their capacity, average occupancy, type of fuel, emission reduction system, speed, emissions in port and maritime distance.

The subsidies are designed for companies or freelancers who pay the freight, as long as a trailer, a semi-trailer or a rigid heavy vehicle is loaded. The eligible cost will be that corresponding to the reduction of external costs in national territory when carrying out the activity. The maritime eco-incentive is the fourth line that is activated in the Support Program for Sustainable and Digital Transport and is part of the sustainable transport aid of the Recovery, Transformation and Resilience Plan. Together with the line to encourage the railway mode in front of the road, these two credits add up to an endowment of 120 million euros that will be distributed, in the coming years, between both modes in an equitable way, although the door has been opened to make adjustments according to demand. The fifth action that will be launched is the transfer of another 110 million euros to the autonomous communities, Ceuta and Melilla to digitize transport companies.