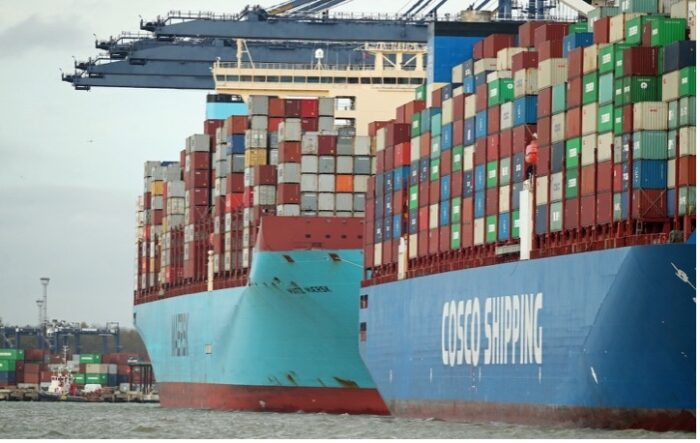 Sirens sounded as cranes lifted containers from the Ever Genius, a ship that stretches four times the width of Buckingham Palace along a pier this week in the UK’s Felixstowe harbour. The warning cries for British dockworkers could well have been alarm bells for the global economy.

Handling more than a third of the UK’s maritime cargo, Felixstowe is battling a collision of full incoming and empty outgoing containers. Traffic jams like this are getting worse around the world, including on the U.S. West Coast, where Los Angeles’ port terminals will operate 24 hours a day at the behest of President Joe Biden.

If goods shipped to the island nation from Asia are not in the water by now, experts doubt whether they will by Dec. 25. The average door-to-door transit time for sea freight to the UK from Asia has risen to more than 70 days, up from 55 a year ago, according to Hong Kong-based Freightos, an online shipping marketplace.

Congestion in Felixstowe is causing such long delays that Copenhagen-based A.P. Moller-Maersk A/S, the world’s largest container carrier, has found it faster to redirect some larger vessels to continental Europe to unload cargo onto smaller ships returning to UK ports.

Felixstowe users were told not to bring empty containers to Taipei-based Maersk or Evergreen Marine Corp. because they had exceeded their allocated storage space, according to a memo seen by Bloomberg News. This is forcing trucks to make longer trips to alternative ports to get rid of empty containers, driving up their costs, said Natalie Caraccio, director of Shore Logistics.

The main culprit is not so much the overwhelmed port infrastructure, but the lack of truck drivers to move the containers, a labor shortfall estimated at 100,000.