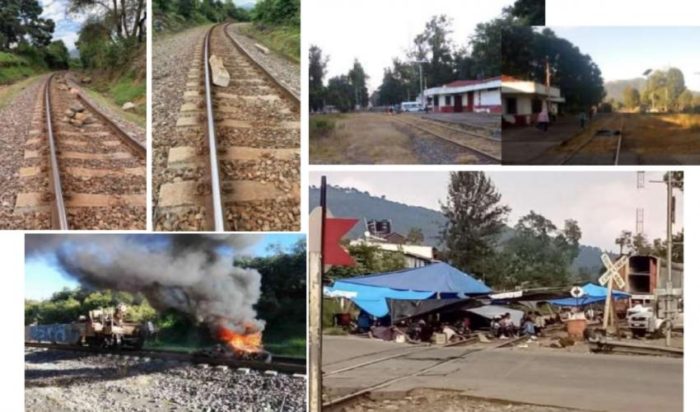 The most intense blockade on record on the railways that connect the Lázaro Cárdenas port, in Michoacán, with the center and north of the country, as well as with the United States, affects not only the free transit of the railroad, but all the members of the port community, including international shipping companies that arrive at the site.

To date, 34 days of blockade have been added to the railways in Caltzontzin and another 5 points in Michoacán, with losses that exceed 22,000 million pesos, coupled with the impact of shipping companies that are suffering from the seizure of containers and the shortage to reposition them. and reload them with goods.

The largest shipping companies worldwide arrive at the port of Lázaro Cárdenas, such as Maersk, COSCO Shipping, CMA CGM, HMM, MSC, Hapag-Lloyd, Hamburg Süd and Yang Ming, among others, which resent the retention of containers due to the railway blockade. In fact, Maersk suspended its rail services due to the impact on supplier Kansas City Southern de México (KCSM).

This has affected industries such as steel, with furnaces in the north of the country at risk of stopping operations; as well as the automotive company, since Lázaro Cárdenas is one of the ports that carries the most maritime trade in vehicles and auto parts on the Pacific coast. Also, department and self-service stores are at risk since imports, mainly from Asia, cannot be carried out to the rest of the country; In addition to the impact on the agribusiness with various grains and on Petróleos Mexicanos (Pemex), which cannot move heavy fuel oil from the Tula refinery.

According to information from the Integral Port Administration (API) Lázaro Cárdenas, the scope of transportation by rail from / to the port covers 192,678,757 inhabitants, of which 67,273,899 are in 16 states of the Mexican Republic and 125,404,856 on the east coast of United States.

Based on the latest bulletin issued by KCSM, approximately 20 teachers from the CNTE in the town of Caltzontzin, municipality of Uruapan, maintain the blockade on the track, which causes the lack of certainty for the operation and programming of trains, in addition to generate unquantifiable expenses, and even more, during the health emergency situation due to COVID-19, where the railway is considered an essential activity for transportation.

“It is reported that, up to the moment of this report, the track continues to be completely blocked for more than 792 continuous hours,” said the KCSM, which keeps 36 trains and 24 locomotives paralyzed, registering 2 events of cargo theft and damage to the general routes of communication due to fires (bonfires and burning tires).

“It has become a common practice to block the railroad tracks that connect to the port of Lázaro Cárdenas, affecting national cargo logistics and different industries with a high impact on the development and productivity of Mexico. The average rail traffic on the Lázaro Cárdenas road is 12 daily trains, and 8 trains on the Toluca road with 960 cars per day (Caltzontzin) ”, lamented the railway concessionaire.

As an example, he added that only 30 days of blockade are equivalent to 240 trains with 28,800 cars with 2,880,000 tons of goods, which are equivalent to 160,000 trucks. With this, the technical and / or total stoppage of all types of plants and industries is put at risk; as well as a national impact generating an extra cost of goods and services to the final consumer.

In this sense, the API estimates that the area of ​​influence of the port is circumscribed through rail connections and highways to the states of Michoacán, Jalisco, San Luis Potosí, Morelos, Puebla, Veracruz, Tamaulipas, CDMX, Querétaro, State of Mexico , Guerrero, Guanajuato and Nuevo León; that generate more than 60% of GDP given that most of the country’s production plants and those with the highest demand for domestic consumption are located there.